The first and only perfumer I’ve ever met just happens to be one of the best in the world. He is the nose behind Le Male, Narciso Rodriguez for Him, and the 2007 version of Dior Cologne. I’m talking about none other than Francis Kurkjian. in 2009 he created his own fragrance house. Today I’m reviewing one of the best releases from the house. Aqua Universalis Forte.

AUF was released 2011 and I’m going to make the assumption that Francis Kurkjian is the perfumer on this one. MFK come in two main sizes. 2.4 and 6.8. you can also buy refills. a 3 pack of 10mil vials for $95. The bottle design is iconic for the house and classic amongst bottle designs as a whole. The juice is clear and has a high concentration of essential oils. I believe forte is equivalent to Eau de parfum. The juice is potent to be a light fragrance. I can actually see the oil on my skin long after I spray this.

The introduction is opulent, elegant and smooth. This opening is why people pay exorbitant amounts of money on niche fragrances. This is blended and balanced to perfection. Meaning there isn’t any part of the fragrance that is too heavy or overpowering to the other. The citruses play their role without dominating the florals. 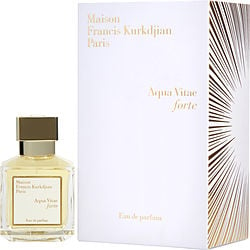 Overall this scent is minimalistic in nature – it doesn’t have any fewer notes than your average cologne but constructed as such that it feels simple. But that’s not a bad thing it smells very well done. Now the white florals remind me of the florals in Artisan by John Varvatos. The comparison stops there. aqua Universalis being more well done. and more potent.

There isn’t a lot going on in the base. This fragrance finishes musky, slightly woody and mildly creamy. It could be by the time I get to the base I’m washing it off or I’m sleeping. It really lasts that long.

Cons: Cost per mil. 2.4oz is $275. Can come across too floral at times for some guys. The smell isn’t a game changer.

I don’t believe the average guy looking for a fragrance will truly appreciate this one. This is for the fragrance enthusiast. The Collectors. The guy ok paying top dollar for the quality others probably won’t notice. If someone smells this on you they probably not going to be blown away. this is something you buy and wear for your own personal pleasure. This scent also disregards gender. like an orange or a steak is gender neutral. That may bother some of the guys who smell this. If it works for you I see this as an everyday clean office scent. Also, less is more with this one. 3 sprays max. Then walk away.