I was out looking for a new fragrance to buy. New to me not necessarily new to the market. I decided to look off the beaten path. The goal? To find a shop that has a good mix of the latest popular releases and some older, not so mainstream fragrances. I happened upon a shop with a very good selection, but nothing I was hankering to buy. Until I noticed a few tester boxes on the floor underneath the Dior section. So, I asked the attendant about them. She replied, “You don’t want them.” And that “They have been there forever”. My reply? “Let me see.” Surprisingly, inside was two coveted vintage releases of Dior Homme. *Cha-ching*

The original release date for Dior Homme was in 2005 but was infamously reformulated in 2011. The bottle is modern sleek and minimalist. The stem is silver with Dior etched around the base. However, the newer formulation has a black stem with the same etching. Inside, the liquid is golden in hue in both formulations. CD is itched in the cap and all the production info on the bottom. Its classified as a woody floral musk. The nose behind this is Olivier Polge. Mr. Polge is credited for such releases as The One D&G parfum, Midnight in Paris, V&A, Invictus, L’homme Libre from YSL, and Spicebomb. On the ladies side, he’s done hits like Flowerbomb, Jimmy Choo for her, and Armani code. Just to name a few. In other words, he does his “thang”. There are two main sizes for this scent, 1.7oz and 3.4oz. however, I have seen 5oz bottles online and some retail stores. The price ranges from $70 – $90 retail.

The notes in this fragrance consist of Sage, Bergamot, and lavender in the introduction. Moving into the heart, you have iris, amber, Coco, and cardamom. To round it out the base leather, patchouli, and Tahitian vetiver. The opening is balmy, waxy and transparent. It reminds me of moister in the air of a sauna. People say it smells like lipstick. However, I don’t know what lipstick smells like so I can’t confirm that.

This first 30 seconds of this opening is about the lavender. It is light and almost watery. Clean. Thereafter, you get Dior Homme’s signature Iris note. At this point, it’s waxy and slightly powdery. For me, this phase of the fragrance is the distinct difference between the 2005 release and the 2011 reformulation. It lasts a good hour and whats missing in the 2011 version. From this point on the fragrances smell almost identical. The iris is up front and joined by that powdery cocoa. To me, it reminds me of swiss miss hot chocolate or Nestle quick in the can. As you get future in the mid the leather comes out. This is my favorite part of the fragrance and it lasts for the duration of the fragrance which is about 8 to 10 hours on my skin. 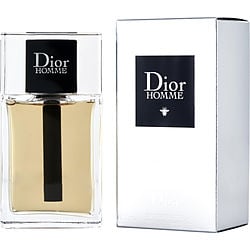 In my opinion, this is one of the classiest most buttoned-up suit and tie fragrances you can find. It’s modern. It’s Unique and great for an upscale date night. I wouldn’t pay an arm and a leg for the original formulation. The current Dior Homme gives you the same vibe with a little less time. Lasting on my skin 6 to 8 hours. One thing of note with this and other Dior Homme flankers I get people who compliment me by saying its clean. Maybe, people think of baby powder when they smell this an thus… clean? If you are a fan of the note of Iris, it starts and ends with Dior Homme. One of the best releases for men. Period.

What do you think about the Dior Homme?